How far can you dream

Well beyond the farthest star

Hope calls to your heart

Smorgasbord Health – The Heart and how it works

Have a heart? Then you’ll want to CLICK on THROUGH to the ORIGINAL POST from Sally Cronin and learn more about your heart and how it works!

It has been a couple of years since I featured the heart in its own series although I have included in related posts. We tend to think of the heart from an emotional perspective but in reality it i…

Source: Smorgasbord Health – The Heart and how it works

Posted in To Your Health

Trust me.  Do you believe that when you hear it, or do you, like so many others, raise an eyebrow and suck in a bit of wind before responding? Why is it so difficult to simply relax and let go? Of course that feeling of not being in control might have a little something to do with it…  Trust me.

Years ago I taught workshops with a gal named, Debi. She and I were hosting a class on relaxation. After our introduction, she asked for a volunteer and a young woman raised her hand enthusiastically. Since I knew what was coming, I simply kept quiet as I positioned her face to face with Debi. The woman was told to turn around and face the rest of the room, take a step backwards, so that she was nearly standing on Debi’s feet and close her eyes. She did this with ease. Then she was told to take three deep breaths and fall straight back onto Debi.  Her eyes flew open and she began to stammer that she couldn’t possibly do that. Debi place her hands on the woman’s shoulders and reminded her that she was right there, holding onto her and was not going to let go, but in order to experience being totally relaxed, she needed to trust, and allow herself to fall backwards.

I will tell you that not one of the people in the room and there were ten others there, could do it either. One fella let the top half of himself start but as he felt himself tipping, he caught himself and stopped. Now, the point of the class wasn’t to make every one fall backwards but in doing so, it would have shown them that they were in deed capable of trusting implicitly.

Me? Uh, no way.  Not that I didn’t trust Debi, I simply could not relax and let go.  I know that trust has a lot to do with relaxing and letting go and depending on the situation we actually can let the concern fall away and go with the flow.

If anyone tries that exercise in trust, let me know how it turns out.

About how to trust another

Each day I say 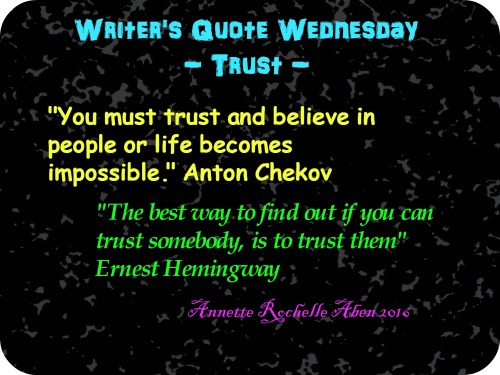 Your Daily Message from Angels…

FIND your FREEDOM in ALLOWING!