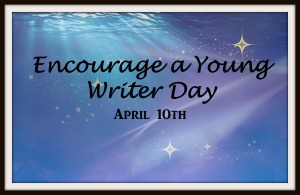 It has been said, that on every April 10th, we celebrate National Encourage a Young Writer Day, funny thing is, I’ve been unable to track down the origins of this auspicious day. Oh sure I found celebrations dating back to 2013, 2014 and 2015, yet nothing to indicate who started this tradition So guess what? This gives us the opportunity to initiate a tradition of our own right here and now!

It IS up to us to encourage young writers and not just for a day but each and every day.  Young writers have an illustrious history of contributing to our literary world. After all, Anne Frank was a mere 13 years old when she penned her poignant diary, giving us a glimpse into a world many of us, thank goodness, would never experience.  And Stephen King, it is reported, sold his first story for the paltry sum of a quarter when he was 13. Makes one wonder, what other glorious works might we have gotten from Miss. Frank, had she lived longer?

These two examples are but a surface scratch and they are not the youngest people on record to have written stories/books and to have them published. C.S. Lewis was said to have been 8 or 9 when he began writing The Chronicles of Narnia. And the book The Young Visiters was penned by 9year old Daisy Ashford! They are not the youngest to write and publish; no.  Ten years ago in London, Christopher Beale wrote a story about his favorite stuffed animals titled: This and Last Season’s Excursions. And when four-year-old Dorothy Straight’s mother insisted she address the question, ‘how did the world begin?’  the child not only wrote the story but illustrated it too.  Albeit, Dorothy’s book, How the World Began wasn’t published until she was 6, let’s give credit where it’s due.

Granted, there are hundreds and thousands of other young people out there who are writing and publishing books. Truthfully, we may never know about them. Still, there are young people you DO know. Children, siblings, neighbors, students, nieces or nephews come to mind. Somewhere in your sphere of influence is a child who may be waiting for some encouragement to start or continue writing.

Probably the best and most effective way of encouraging a young person to write is to read to them. Let’s face it, ask a writer what they spend much of their time doing and they will most likely tell you, it’s reading! It’s like priming a pump, planting seeds or fertilizing nutrient deprived soil to read to someone. Once they learn how to read for themselves, the chances are pretty good they will continue the habit.

It’s never too early to start. In our family, my parents read to us every day. They made time to read to us, take us to the library and fill our home with as many books as finances allowed. Two of the three of us have either written or illustrated published books and the one that two of us worked on together, became a national award-winning publication!

Gift a young person tools of writing such as notebooks, pens and the humble diary.  Boys as well as girls keep diaries, they might write about different experiences but they DO write in their secret books. Many an interview with an author has centered around the scribbles and jotting of notes, tales and rants that filled the pages of notebooks and journals. Much of which lead to them publishing books.  Actually, you’ve be hard pressed to find an author who doesn’t have a stack of notebooks or journals filled with the next best-seller!

Create writing prompts for them, especially if they have exhibited a tendency towards enjoying writing already. Write down words or phrases on small pieces of papers, fold the papers and put them into a Prompt Jar.  Papers can be chosen at specific intervals such as each month or each week, or the young writer can feel free to pull one whenever the mood strikes. It doesn’t have to be rigid but like many of us who write, we appreciate the discipline of some sort of schedule.

Start or suggest starting a writer’s group in your church youth group, scout troop, at your school, in your neighborhood or even in your own family should you be lucky enough to have the numbers to pull that one together. Maybe your local library has one, I know ours has several for young people of all ages. Under the guidance of someone who can offer instruction as well as constructive criticism, young writers can hone their skills and perhaps find talents they weren’t even aware existed. In some of these groups there may even be the opportunity for them to branch out into competitions or contests. The group themselves may hold an event where the young writers can share their works with an audience in one fashion or another. And possibly, the group can actually publish a book!

Whew!  My head is swimming with ideas right now and the first is to become more involved with my local library. There may be something I can contribute, even if is only to share what they are doing via my social media outlets. Also, there was a project I wanted to do for Christmas gifting last year and of course I started it a little too late… That was to put together packages of journals, pens and writing prompts for several young persons in my family and amongst my friends. The added gift was to let them know that they if they wanted to turn those journals into books, I would help them self-publish. I have the time this year, especially if I begin right now.

So yes, this may be the first many of us are hearing about National Encourage a Young Writer Day but it doesn’t have to be the last. I read where people are being asked to use the hashtag #EncourageAYoungWriterDay throughout social media today.  If you can have a chat with or slip a note to a young writer in your world today, to encourage their interest in writing, do THAT! You never know how that small connection could make the biggest difference. After all, don’t the smallest connections like that sometimes turn out to make the biggest differences to you as a writer?

This site uses Akismet to reduce spam. Learn how your comment data is processed.