There is a National Haiku Foundation, http://www.thehaikufoundation.org dedicated to the celebration, promotion and preservation of English Haiku. It officially began January 6, 2009 under the guidance and direction of Red Moon Press founder, Jim Kacian.

In August 2013, the comprehensive anthology, Haiku in English, The First Hundred Years was published, featuring over 200 poets. 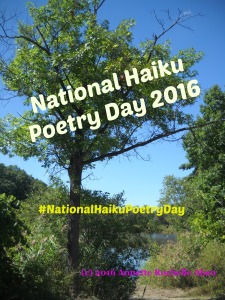 Why bring this up? Other than the fact that I am a poet who writes English Haiku, Sunday. April 17th is National Haiku Poetry Day! Yes, it is AND it is being celebrated all over the world. Bulgaria, Sweden and the United Kingdom are hosting events to commemorate this occasion along with several communities throughout the United States.  Should you be lucky enough to live in California, New York, Louisiana, Vermont, Oregon or Washington State, you will find events in Los Angeles, San Francisco, New York City, Shreveport, Mount Angel and Seattle, respectively.

Don’t happen to live anywhere near a haiku happening that’s been planned?  Start one of your own!  Write a haiku, read some haiku. Share haiku with the world by blogging your enthusiasm. And remember to hash tag your posts with #NationalHaikuPoetryDay

How I explain haiku to others is simple:

To tell a story

Perhaps you will try your hand at it and if so, be excited to share it with as many people as possible. Oh, and I may make the suggestion that you even share it with your pets and plants. Seriously, they LOVE to connect with our hearts!  Try it, read haiku to a tree one day and feel the love in reciprocation.

The world is a better place

Sharing my joy with you on this awesome, National Haiku Poetry Day, 2016!

Learn more about the actual celebrations scheduled for this day http://www.thehaikufoundation.org/national-haiku-poetry-day/

This site uses Akismet to reduce spam. Learn how your comment data is processed.