Kathleen Holdaway Swain Mother working in the yard Mother checking out cemetery lots. I am posting videos from my youtube account for those of you who want to see my mother in action. She is availa… 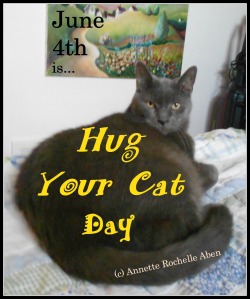 Yes, this is Oh. Kitty! and he IS the poster four-legged, this year, for Hug Your Cat Day (at least in our house) Not to be out done by the previous title holders,  Sweeney and Claudius (who flat out refused to allow me to take new photos of them) But just take a look at that face.  Does that face say, “Please, human. Pick me up and cuddle me like a human infant?” Uh, that would be NO!

He is as soft as can be, and everyone who sees him, he is really the only one of the three who actually makes his presence known when we have company, delights in having someone to pet him.  The occasional scratch behind the ears and perhaps a few long strokes from head to tail are tolerated. However, make NO mistake about it, you had best have your will in order if you plan on picking him up for a cuddle and coo.  This feisty senior citizen (I believe he’ll be 18 this year) is no more interested in being held than you are in having him sneeze on your dinner plate!

Oh sure, while he’s flaked out on MY bed (see above photo) he’ll allow me to whisper sweet nothings, like: “Hey buddy. You are such a good boy!” And even lets me tell him how much he is loved.  Yet, combining that with the act of t-o-u-c-h-i-n-g his royal fur-self, becomes a game of who can move quicker, me or him. He’ll purr for a moment or two, which provides that false sense of security that maybe, just maybe THIS TIME I can show some well intentioned affection.  And should I fall for it, possibly even attempting the taking-my-life-into-my-own-hands maneuver of TUMMY RUBBING… Well let’s just say, I keep my feathers numbered for just such an occasion.  (deep sigh)

I really do enjoy a snuggle with a kitty.  There is something so precious when we both relax into a peaceful moment of pure relaxation and trust. Believe it or not, I have had such experiences with cats with whom I lived.  Come to think of it, I raised none of the cats in this household…  Could THAT be the reason?  No, never mind, these cats won’t cuddle with those who DID raise them, and they live here too.  Guess I may just have to resort to dreaming of the good old days, looking at photographs and enduring the tales of those who DO get to hug and love on their cats.  Live vicariously or not at all in this case.

So, should you find yourself near a being of the feline persuasion on June 4th, or any day for that matter, and they will allow it, have a good old fashioned cuddle and think of me.  Yes, me.  I’ll be the one smiling through my tears as I watch through the window.  But don’t worry, I’ll be okay.  I’ll just go toss myself onto my bed and have a good cry.  I know, I’ll pen a rhyme and pour my heart out…

Oh, it’s the celebratory day to hug your cat!

Tell me, who was it that came up with an idea like that?

Ever try to cuddle with one of those little buggers?

I’ve the scars to prove, not every cat is a hugger!

So they make it their business to give you a piece of their mind!

Responding with a look that says ‘set me down NOW or I’ll show you!’

They attempt to act disinterested, shy or aloof

But I’ve seen them ‘cozy-up ‘to every non-cat lover that visits, so there’s your proof!

Thought, for a moment, about using a blanket

But after hearing a guttural growl, it made me think, ‘naw, forget it’

Enticing with treats might seem to work for some

But as soon as the treats are devoured, away they run

*note – you should never disturb a cat while it’s eating

Lest you be left with arms, sliced up and bleeding *

So whoever it was that came up with this notion

That we should have a Hug-Your-Cat-Day, can go jump in the ocean

I prefer getting along with the cats in my home

Even if it means sitting in my chair all alone

For unless THEY decide they desire a scratch or a pat

It is not always  a good idea to try to hug your cat!

Your Daily Message from Angels…

SEE yourself MOVING in GOOD DIRECTIONS!

On my way, Angels! Thank YOU!!