Your DALY MESSAGE from Angels

YOU ARE, IN THIS MOMENT, REBORN!

Thank you for that reminder, Angels!!!

FEEL the ENERGY of REBIRTH!

Thank you for your Attitude of Gratitude

Rebirth is part of the great scheme of nature. Living for the moment because in the next moment, there is an opportunity to live again!

Affirmation:  I am reborn in every moment!

I love you, Annette Rochelle Aben

Posted in Attitude of Gratitude 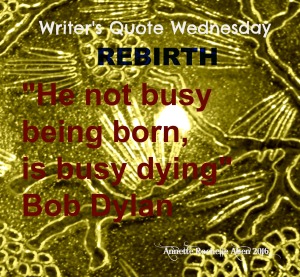 Ah, rebirth…  what a concept. So many ideas have been floating through my head since I saw the prompt.  The first took me back to 1974, the year I graduated from high school.  There was a quote in our yearbook, which was taken from the Bob Dylan song, It’s Alright Ma, (I’m only bleeding) and here it is: “He not busy being born, is busy dying.” This was our class motto. Still, I am wondering if those who chose it (I was not consulted) knew what this song was all about, or if they just thought it was a cool sentiment.

In my research, I found that this song, which was written in 1964 and released in 1965, was a tension reliever for Dylan. He was angry with the politics of the United States, with the socio-economic conditions too and therefore, this was a huge protest song. Yet, unlike his previous protest songs, this was not filled with optimistic solutions, no, this was a rant.

Many artists have covered this song but the most famous of all the covers came in 1969 when Roger McGuinn’s version was used in the film, Easy Rider. The most recent cover? Just a couple of years ago, in 2014 and the artist was Lee Abramson.

Yet, I have to say, that over the decades, just this line “He not busy being born, is busy dying,” has always surfaced in my thoughts whenever I was faced with the forks in my own road. It was as though I was realizing that I not only had to choose which way I was going to physically travel, but to own the importance of my emotions where the choices were concerned.  We have such emotions about birth and death. We cry at both, we rejoice, we connect or we disconnect. The power of our emotions plays out in our choices and our truths are observable.

There is rebirth in powering through the choices we have to make. Of course that process can be uncomfortable and may even lead us to believe that the choice to cash it all in would be preferable.  Still, once we stand face to face with the wonder of the open road before us, we may be dying to sally forth!

Today, I am busy being born! How about you?

Be reborn each day

Waken from the death of sleep

To claim your fresh start

Wiping the dust from your eyes

Stand and stretch your arms

Your legs will strengthen in time

Open up your heart

As you take the deepest breath

Take Nothing For Granted

For all the strength I had to get all I needed, done.  For all the times I never looked back but continued until the race was won. For all the knowledge I have still to know and for all the places I have yet to go. I offer my humble self in prostrate form as my way of saying I am grateful for all that is this life, and for the grace with which I am constantly being reborn!

Tagged #1 Best Selling Author Annette Rochelle Aben, gratitude, humility, inspirations, rebirth, take nothing for granted, there but for the grace of God